It’s all about giving your readers what they want.

Do you enjoy reading a stranger’s tweets about his/her health? I don’t, really. But I do enjoy reading the health tweets by my close friends and family. So strangers don’t have to read my tweets about chocolate cravings, I have separate those tweets into a dedicated twitter account called @mattshealth.

How about baseball? Many people don’t want to read people’s tweets about baseball, so I put mine into a dedicated baseball account, @57hits.

Certainly people don’t want to hear someone rant on about fantasy football, so I have a specific account for that, @flyingonions.

My 15 twitter accounts are all about allowing the reader to select exactly what they want to see from me on twitter. My main twitter account, @mattmaldre stays a nice clean account without any tweets about my health. It is clean from any foursquare check-ins, baseball tweets, football tweets.

How do I manage 15 twitter accounts? It’s really easy with hootsuite. Super-easy. I really recommend any twitter user setting up separate twitter accounts. It makes things really nice for your followers.

When people get to know me, they soon find out that I have multiple twitter accounts. But most people don’t know which ones to follow. Below is a nice list that outlines all my twitter accounts and how active each one is with the number of tweets made in 2014. 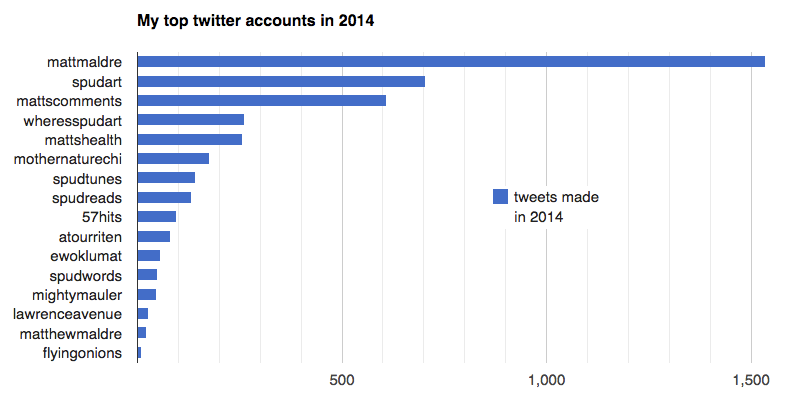 One of my life goals: To help people not just consume, but to create.

Instead of skyscrapers, downtowns would be full of treehouses. #inmyalternateuniverse

I HOPE IT IS A TRANSFORMER BUILDING. I love imagining skyscrapers as Transformers. #autobotcity anyone? http://t.co/thGyje5ep0

@mattscomments
Comments I make on blog posts
609 tweets in 2014

The turkey leg from @MannysDeli was very good (@ Taste of Chicago w/ 89 others) http://4sq.com/kmnKjH

@wheresspudart
Tweets about Chicago (via foursquare)
262 tweets in 2014

The word for someone who eats an entire chocolate Easter bunny in one sitting: animal. #iamananimal

@spudtunes
Tweeting about music
142 tweets in 2014

Too many artists worry about making stuff rather than making meaning. "Don’t worry about your stuff. Worry abo… http://t.co/4x7PbpkDth

The only way to make it rain on the Death Star is to activate the emergency sprinkler system.

@atourriten
Librarian for the Death Star in Star Wars. A real character in the “Death Star” novel.
81 tweets in 2014

When an Ewok dies, the Ewok's spirit joins with his/her birth tree. #EwokFactMonday

@ewoklumat
Fictional twitter account for the ewok named Lumat, the official woodsmith of the ewoks. He even has an action figure!
56 tweets in 2014

How can ZIZ be in the three-letter list for Scrabble when there is only one Z tile?

@spudwords
Fun with words. If you like words and etymology, you’ll love my tweets.
50 tweets in 2014

Croquet is best played in the snow.

@mightymauler
The croquet superhero®. Challenge me to a game of croquet in Chicago, and I will accept.
47 tweets in 2014

I'm looking forward to my first sidewalk cafe! Thanks to @HimmelsChicago http://t.co/jaRydlKMrD

@lawrenceavenue
Lawrence Avenue is a major street I walk on in Chicago every day at 4800 North. This is what Lawrence Avenue would say.
27 tweets in 2014

I need to have more splagchnizomai

@matthewmaldre
Tweets about being a Christian
22 tweets in 2014

Andrew Luck is not a trash talker. He's a tribute talker. http://t.co/jNdZ3bLN7Q

How many Twitter accounts do you have? How many tweets did you make in 2014?