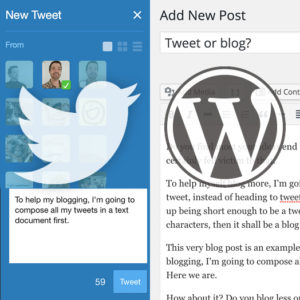 Do you find most your ideas end up on Twitter, because it’s much quicker than writing an entire blog post? I’ve certainly fell victim to that.

To help myself blog more, I’m going to alter my tweeting procedure. Every time I have something I would like to tweet, instead of heading to Tweetdeck, I’m going to compose my tweet in a text document first. If the draft ends up being short enough to be a tweet, then it shall be a tweet. But if the draft ends up being longer than 140 characters, then it shall be a blog post.

This very blog post is an example of this new procedure. Originally I was simply going to tweet: “to help my blogging, I’m going to compose all my tweets in a text document first.” But the idea needed more explanation. Here we are.

How about it? Do you blog less ore more because of Twitter? Is it a good thing to quick-shoot the ideas out on Twitter first?