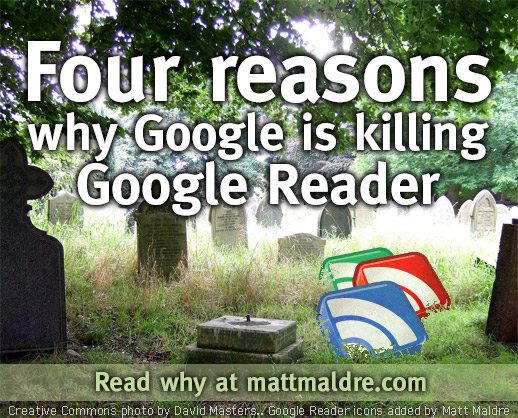 Why would Google kill Google Reader? There are a few false excuses floating around. Some people are saying Google is focusing on their core efforts. Others are claiming that RSS is a dying technology. Both of those reasons would be extremely false.

The “RSS is a dying technology” excuse doesn’t fit either. RSS powers one of the top ten most-used iPad apps and Apple’s iPad App of the Year in 2010, Flipboard. Millions of podcasts live on RSS. Blogs are able to provide email subscriptions because they are powered by RSS. You can add content to your website with RSS; things like flickr images, other blog posts, and articles. If you say Google is leaving RSS because it’s dying, then please come back to 2013 in the land where we live with the internet.

I’ve loved using Google Reader. I would evangelize Google Reader to friends and family. It’s simply the best. But often I would get mixed and confused responses from people. The reasons to not use Google Reader fall into the following four categories:

1) Familiarity
“I just like visiting the actual website, this Google Reader feels different. It’s not the site that I’m familiar with visiting. It’s like someone stole all the content and put it into this other site.”
— Why this is stupid: Why do you need that same familiar site? Google Reader provides so much more functionality than the original site.

2) No design
Some people are put off by the interface and how mechanical it feels.
— Why this is stupid: Clean design is good. It’s more efficient.

3) Feels like email
People say they already have email, why would they want something else that kinda looks like email.
— Why this is stupid: Google Reader is not email. It’s better than email, because you have complete control over what you get. With email, people can spam you. With email, you have to respond. But with Google Reader, there is no spam. You don’t have to reply to things you read.

4) It takes time to set up
— Why this is stupid: You can start small. Pick three websites you like. Put each one into the subscribe box. Now you are following three sites and you get updates automatically.

Google is extremely scientific when making choices. They probably did polls of Google users to hear what they thought about Google Reader. I’m betting the majority of the people they polled didn’t use Google Reader for one of the reasons above.

It’s a shame, because those people just don’t understand Google Reader. Once you understand the service, you get attached to it. Just ask any person who uses Google Reader regularly, they will tell you how much it’s a vital part of their reading, research and discovery online. Wouldn’t Google want that? To have a service their users are so attached to, they couldn’t imagine the internet without it?

4 thoughts on “Four reasons why Google is killing Google Reader”