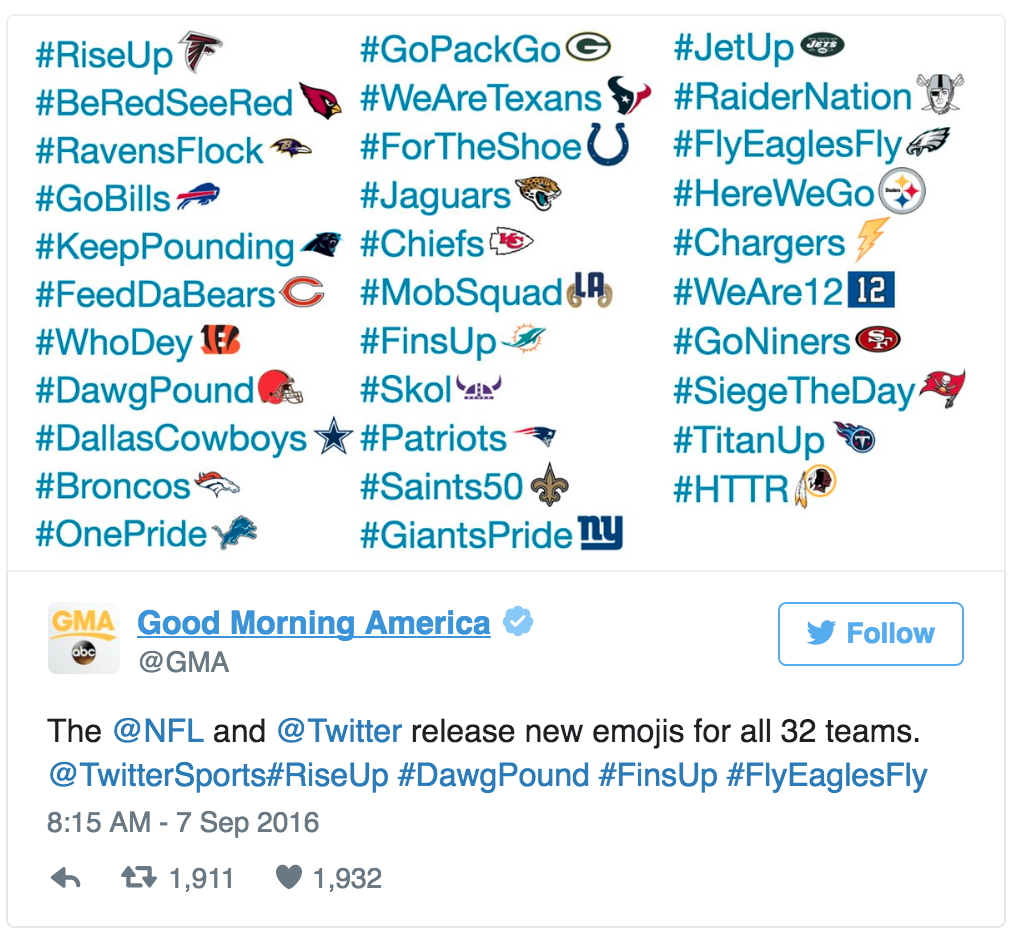 The NFL is assigning official hashtags for each of the 32 teams. Anytime someone uses one of these hashtags, an emoji of the team logo appears right next to the hashtag. Tweet out #Broncos, and you’ll get a Broncos emoji next to the hashtag. It’s pretty cute when that happens. Back during the Olympics, whenever you tweeted #Rio2016, you got the Olympic rings next to your tweet, like magic!

The emojis are fun, but they can also be kind of controversial, because it’s Twitter the corporation deciding what hashtags mean. I wonder how political users who tweet #Patriots would feel about having an NFL logo appear next to their tweet. Kinda odd.

Even more odd would be if a St. Louis Cardinals fan tweets the #Cardinals hashtag; and then the Phoenix Cardinals emoji appears next to the hashtag. Yipes! Same thing with San Francisco Giants fans tweeting #Giants only to have the New York Giants emoji appear.

To fix this problem, the NFL got creative. The Arizona Cardinals hashtag is #BeRedSeeRed (uhhh, what?). The Giants got #GiantsPride. Why not #ArizonaCardinals and #NewYorkGiants?

Logic would say, just put the location name in front of the team name. The NFL did that with the #DallasCowboys hashtag. But, it’s the only team to have the city and team name. Why?

The rest of the teams get cutesy slogans. Bears fans are encouraged to use the incredibly silly #FeedDaBears. Who in Chicago seriously uses “Da” in anything they write? Answer: NOBODY. Plus, Feed the Bears? What is this a zoo? Our team this year is certainly not like the Monsters of the Midway that would need a feeding like animals.

Most of the hashtags are crazy. People might be upset at the NFL trying to dictate what hashtags we should use, but if done properly, assigning hashtags can be helpful. When you attend a conference, and are about to tweet, you want to know what the hashtag is for the conference, so everyone there can find your tweet.

The Olympics had the official hashtag, #Rio2016. If it didn’t tweets would be split up over #Olympics #SummerOlympics #Olympics2016 #Olympics16. There needs to be a standard for the grouping hashtag to work. But you have to do it right. The upcoming 2018 Winter Olympics is using #PyeongChang2018. Uuuuh. Ok.

Are football fans really going to tweet #FlyEaglesFly? Is this an airline? Will Lions fans use #OnePride? Poor dolphins fans are stuck with #FinsUp.

It’s almost like the NFL wants people to talk about how crazy these hashtags are, so people will then use them ironically. #ForTheShoe!!

(hat-tip to Chris Thilk’s blog post, The NFL tries to tell people how to use hashtags, which alerted to me of these hashtags)