The demographics of sports watching is changing. Young people are less interested in sports. Bloomberg reports, “When asked what type of content they enjoy watching, young people express less enthusiasm for sport than other genres”

What they found should be super-disturbing for the media world. Two of the bottom three categories in terms of spending are “News and Current Affairs” and “Sport.” Unfortunately those are the categories that legacy media – the broadcast and pay cable networks in particular – count on the most to bring in viewers and advertisers. “Live sports” is often given as the reason why many people haven’t cut the cord yet and switched solely to streaming or on-demand services.

A key part of the Bloomberg article states, “Young people have far more entertainment options now than in decades past and spend less time in front of the box.” Indeed lots of media options is a large reason. Curious is the dip in sports viewership among people in their later thirties.

Why are people in their later thirties watching less football?

Participating in fantasy leagues is a huge factor if people watch football.

I think of the NFL as a sport that is watched primarily for fantasy football. If you aren’t in a fantasy league, then you aren’t watching. That happened to me. For all my life I never watched football, until my 20s when I joined a fantasy football league. Being curious how my players were doing, I would watch football every week. Fantasy football is a sort of language to speak with other people. Watching the games allows you to speak this language and ask people about their fantasy team.

Then everyone in our league started to have kids, and thus, have less time. We ended the league. Now I have zero interest in watching football. Sundays are much more open for other things.

This sort of life cycle must happen to thousands of people. You enter your parenting years, and football watching goes away. Then the kids get older, and you might rejoin a league, and football re-enters. Granted, not everyone fits into this life cycle, but many people do.

I know many parents in a fantasy football league. This drop-out for people in their 30s to 40s must have an effect. You can see it in the chart for sports. 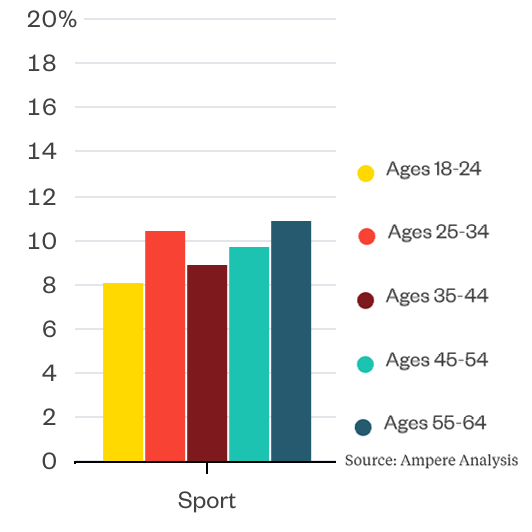 3 thoughts on “The life cycle of watching football”