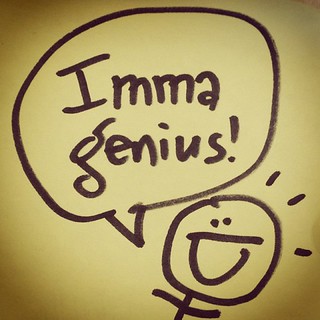 My brother Erik on Disney:

I was really impressed with how every single Disney worker was incredibly kind. From the waiters to the street sweepers to the whatever else job there is-ers. And it wasn’t a “I’m being nice because i have to be nice” attitude. They seemed genuinely nice.

People really, really like Disney, so i think the workers enjoy being a part of disney

Erik makes some good points. It’s kinda like the Apple store. Do they have Disney geniuses that work at a Disney genius bar? When a toy of yours breaks? Or if you have a trivia question about a Disney feature?

When you think about it, that’s part of Apple’s mystique. They have people who work there that are called geniuses, because they love the product so much, that they are walking evangelicals for the product. And it makes people want to aspire to be as smart about Apple as these geniuses. They aren’t just Best Buy slackers. These are lovers of the product.

Having geniuses does several things for Apple:

1) Helping people.
People like being helped when they have a problem. Anytime a real human can stand beside you in person, that’s huge.

2) Examples of fans.
These geniuses show that not only can you be a fan, but you can be an überfan. It’s like there is an official level that one can attain. Imagine if the Chicago Cubs had an official überfan status.

3) Example of knowledge to gain.
By raising up those who have superior knowledge of your product, it encourages others to gain this knoweledge.

Idea:
Wrigley Field should have a Genius bar where people can come up and ask the geniuses questions about the Cubs. Either about the current team or about the players in the past. It would strike up good conversations. People would try to stump the geniuses.

If you, a regular fan, can stump the Cubs Genius, then that kinda makes yourself a Genius. You have achieved semi-über fan status!