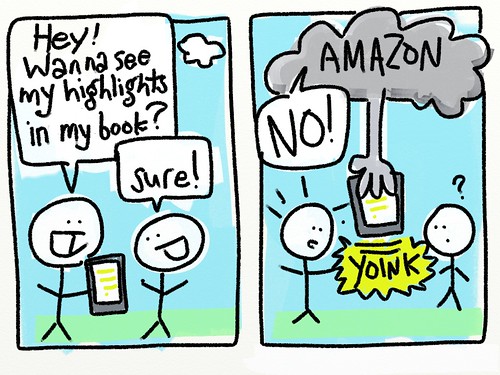 Amazon is limiting the ability for people to share their highlights in books that readers own. Laura Hazard Owen wrote an excellent post, Amazon bans Kindle clips.” Here’s a clip:

Findings, the year-old content-sharing site from untraditional VC firm Betaworks, was built on the ability to sync and share Kindle highlights. But Amazon told Betaworks last week that this function violates its terms of service. Findings is shifting its focus to web clipping.

…Amazon itself lets readers share their highlights and clippings through a feature called “Public Notes,” and it’s possible the company is cracking down on competing services like Findings in an effort to promote its own service…

…Finally, Amazon simply may not want third-party apps accessing Kindle highlights. If so, we should expect to see services like Evernote cutting off that functionality soon.

There’s this old school stigma where those in power want to squeeze and hold onto things tightly. Like highlights on the Kindle.

Just when I had hope that Amazon might start making note-sharing and highlight-sharing more social, they go backwards and lock it down further. That’s not the direction Amazon should be going.

Given Amazon’s perspective on this, as a book reader, I am seriously going to start considering buying my books elsewhere. Ultimately, I want a platform where I can share my notes and highlights with others.

Instead we have old-fashioned minded book readers in charge who think that the act of reading is a completely solitary one. While you might be in solitare while reading, what’s most important is what happens when you process the book in your mind. When you share what you enjoy. It seems that Amazon is prohibiting the complete sharing of what you enjoy.

This runs parallel with Twitter. Twitter is holding their API with a tighter and tighter fist. Originally Twitter was built on an open platform. It grew and grew due to people being able to share short tweets. You could have many different readers. You can analyze your tweets in all formats. You could count how many people follow you, at-reply with you, etc. It was an open system. Now Twitter is cracking down on the very developers that made them big in the first place.

Twitter wants more control over where people can see their tweets, so they close off outside parties to the ability to display and analyze tweets. Just as Amazon is closing off their system for people to be able to read highlights.