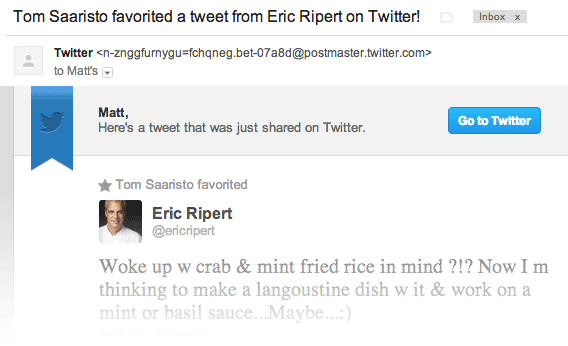 Unfortunately, it seems twitter sends many of these tips. In fact, sometimes these emails with fav tips can come more than 24 hours after the tweet was faved.

Isn’t twitter in the business of being live and up to the moment in the matter of seconds, not days? Twitter sending a fav notification 24 hours later seems outside their focus. Why would Twitter do that?

Because Twitter is becoming an email publisher. Twitter realizes the power of email. People check their email regularly. Email is another channel for Twitter to get people to use their platform more. It’s in Twitter’s best interest to be pushing out more emails.

But what happens when Twitter doesn’t have enough email notifications to send to someone? The best trick with email is to send things consistently. When there isn’t anything for Twitter to send, they lose that valuable consistency.

Just when you thought Twitter was contained to the world of tweets. Twitter is now becoming an email publisher.