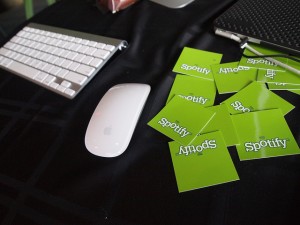 Spotify is supposedly testing subscription-only tracks (via Engadget). When I first saw this reported on Anthony Notes, he used an image of redemption cards. I initially thought Spotify was going to be offering some sort of redemption code via cards.

Imagine if you can get access to a particular song if you have the redemption code on a card. Which… when you think about it, would be rather sneaky of Spotify. If people had to start paying to unlock certain songs. They could probably do that on their platform now. Although existing Spotify subscribers would be quite upset to have to pay more for particular songs.

Think about the Adele album that was not released to streaming subscription services like Spotify. What if Adele’s album was available to Spotify subscribers for a one-time activation fee of $9.99? (a buck cheaper than getting the actual MP3s from Apple). How many Spotify subscribers would jump at that?