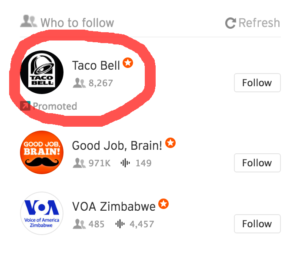 Taco Bell has a SoundCloud account? What do you think they would play? (Yeah, I should probably listen to their channel before I write about it, but let’s first speculate what they could be playing, because that’s more fun).

Taco Bell commercials. Ads would be lame. Who would want to hear an entire playlist of ads? Even if they were funny ads, it would get old.

Music. Most likely this is a curated channel of music that would appeal to the younger Taco Bell demographic. Would it be music from well-known artists? Instead, hopefully Taco Bell is out there bringing undiscovered artists to light.

How awesome would it be for Taco Bell to develop their own music label with completely new artists nobody has heard of? It sounds incredibly wacky, but I’m serious. They could play their songs inside Taco Bells across the nation. Taco Bell restaurants would become a place people would go to listen to new upcoming artists. Most of the time, we get tired of hearing the same artists and the same songs on the radio. Taco Bell’s brand is just wacky enough to sign unknown artists, yet Taco Bell’s footprint is widespread enough to really pull it off as a viable station and label.

Content Marketing. Ok, so maybe it’s not music. It’s not ads. Maybe they have some sort of podcast covering interesting artistic lifestyles. Sorta like how Red Bull covers extreme sports, Taco Bell could interview artistic people. Again, this sounds wacky, but think about how crazy the concept of Red Bull covering extreme sports is. Red Bull. It’s a sugar-rich nutrient-deficient drink. Red Bull is not healthy for you, yet they are able to connect themselves to extreme sports. Why couldn’t Taco Bell do the same thing, but with an artistic group?

Ok, maybe now it’s time for me to actually listen to the Taco Bell SoundCloud to see what they are playing. See the comments below for my thoughts about what they are actually posting to their SoundCloud.

2 thoughts on “What would Taco Bell play on SoundCloud?”