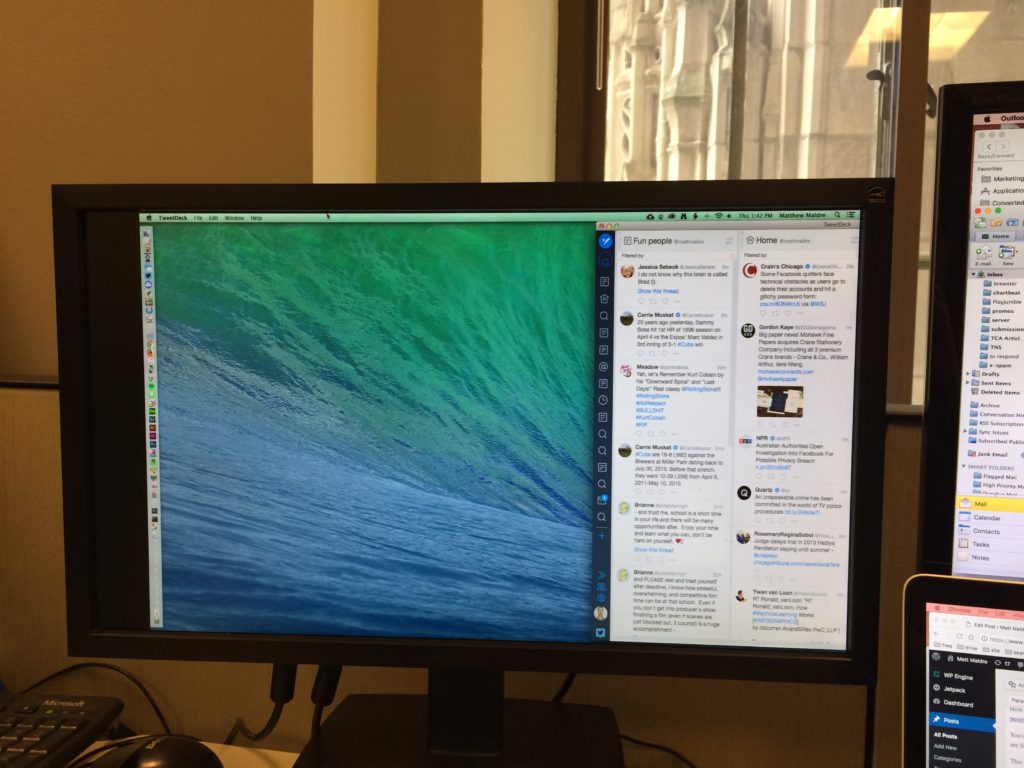 I’ve found my favorite way to keep Twitter running in the background at work. Tweetdeck is the tool, with two columns. Yup. Just two columns.

If you try to use the normal Twitter stream on the homepage, you’ll have to manually click the “See 35 new Tweets” message. Plus, the homepage of Twitter shows you the tweets that Twitter picks for you, using their secret algorithm. I don’t want some algorithm picking what tweets I see. I imagine you don’t want this algorithm either.

Let’s skip the algorithm by using Tweetdeck. It’s much better than the homepage of Twitter.

Tweetdeck constantly runs on my third screen at work. You can even have multiple columns with customized streams.

I keep two columns running. One column has tweets with no links. The second column shows only tweets with links.

Twitter has become this sort of broadcast/promotion channel for links. Often I just want simple commentary with no links. Tweetdeck allows you to filter out any tweets that contain a link. In the settings, I tell Tweetdeck to exclude any tweet containing the following text: .ly .gl .com .com .org .co .li (basically any text that looks like a URL). 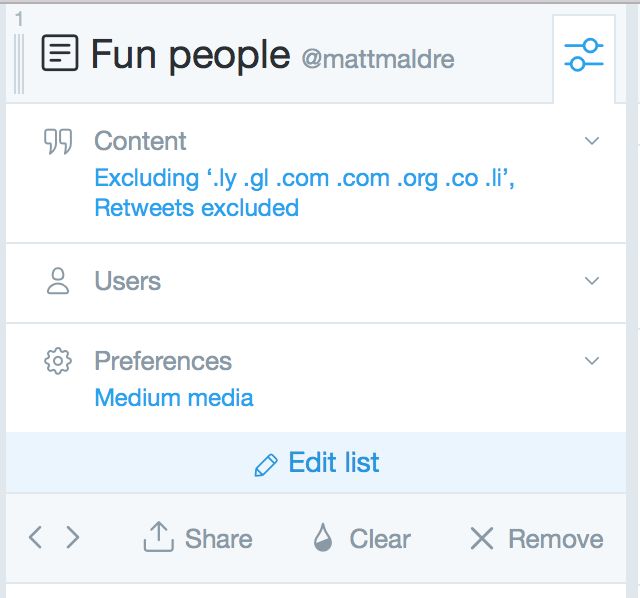 You’ll also notice that I filter out retweets. I use this column to engage with what my followers say. Not what they retweet.

Then this column goes a step further and includes only real people. No companies. No brands. No publications. Just people.

You’d think with 1,100 people, that there would be a ton of tweets. Not really. All tweets with a link are filtered out, making the stream manageable. About every 15 to 30 minutes, there are seven tweets. That’s it!

This column allows me to really interact with the people I follow. Many times we follow people and never get a chance to reply to their tweets, because they get buried among the avalanche of publications and news organization tweeting news. But with those filtered out, I get to read the simple non-promo tweets from people.

Certainly links in tweets can be good. Often you need more than the 280 characters to explain something. And we do have a hunger for breaking news. That leads us to the second column.

Now we certainly want tweets with breaking news and helpful articles! This is the column to do that. This stream is set up to include tweets ONLY if they have a link. And it’s set it to include everyone I follow. 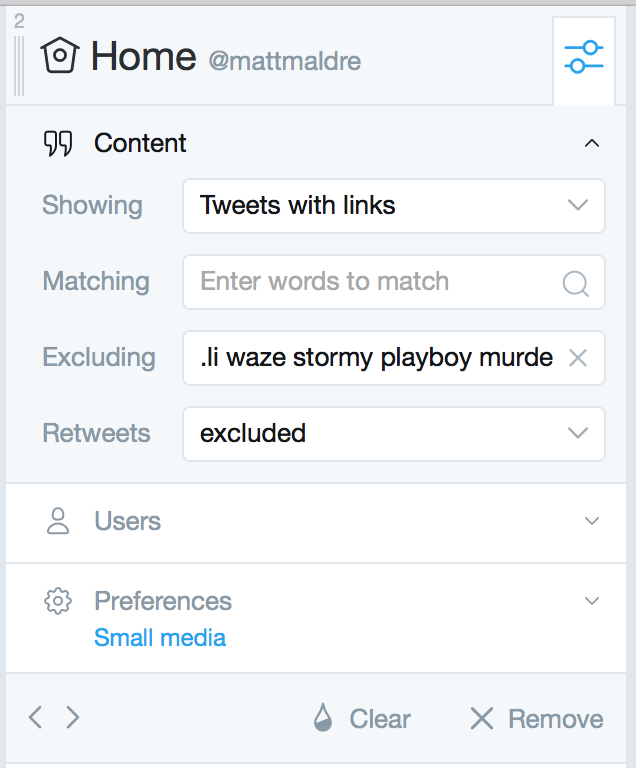 The first field sets to include only Tweets with links. This will be a lot of tweets!If you follow more than 1,000 accounts, you’ll find this stream updates constantly.

When I’m sitting at my desk, I glance over to Tweetdeck and see the newest breaking news in the second column. And then I’ll look at the first column to see any interesting non-link tweets.

Two columns is pretty much my limit for casual glancing. Three or more columns gives me information overload, making it too hard to really look at the tweets.

However, I do keep extra columns for other lists and keywords. But those are tucked away off screen. When I want to go more in-depth, I’ll pull out the Tweetdeck window to reveal these hidden columns. For the constant updates, I stick to these basic two columns.

Do you have a favorite way to use Twitter? Let me know in the comments or via Twitter.