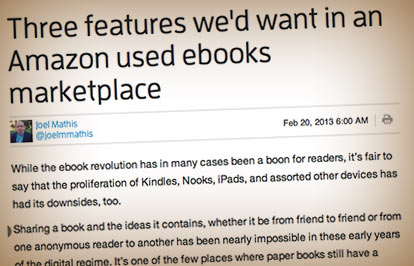 Please consider reading his points in detail on his blog post. Here’s my commentary on each point:

1) All ebooks should retain their marginalia

I’ve heard that if a publisher updates their ebook, that when it updates on the reader, all the user’s notes are deleted. Yipes!

I would so love for my marginalia to stay in tact when I share a book. In fact, I can’t even imagine sharing a book with someone without my marginalia.

One of the keys to lending eBooks would be the marginalia. I would be ten times more likely to read a book from someone if they wrote in the margins. Ok, so this really fits more under the first point. But it’s just kinda obvious that when you loan a book to someone, that you wouldn’t put a 14-day limit on it. Amazon is just stupid here.

Joel brings up a great point that in Amazon’s early days they got a huge boost in traffic when they added more used booksellers to their offerings.

It’s always a bit sad to see when companies abandon their original roots with a community. Twitter grew thanks to developers using twitter’s open API. Now Twitter has disabled much of the functionality of their API. Instagram was a community for cool people to share their photos. Now Instagram claims eternal rights to everyone’s photos, even after a user deletes their images.

Amazon not allowing a used marketplace for ebooks is like Amazon turning their backs on the people who love used books.

(hat-tip to Kevin Eagan for linking to aforementioned article in his blog post, “Friday reads: ‘losing the book as a symbol’ and ‘literary machine’“)