You buy a product online, and then the next day an ad for the very same product is shown do you. Do you wish you could right-click on the ad to say, “I already own this. No more ads for this product.” That would be handy, right? “I don’t need to own another one of these products, thank you. I just bought this one, don’t you know this?”

Mark if you own the product already

We should be able to tell the advertiser that we no longer want to be see this ad–and the reason why: I bought this, or maybe I don’t like this topic.

Comments on the ad

Imagine a world where you could interact with the ad. Treating the ad like a blog post, where you could leave public comments on the ad. Then all the ads all over the internet become more accountable, because you have all these people commenting on them. 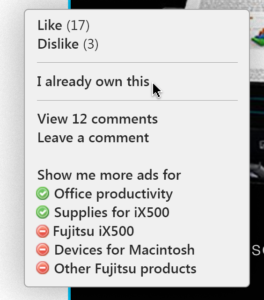 Even more efficient is this idea by Sparxmind, “it’d be nice if ads had thumbs-up, thumbs-down, and report buttons.”

A thumbs-up/down would be handy. How did the advertising world not think of this already? Certainly they have; and they haven’t implemented it for whatever reason. You’d think everyone would benefit in the long run to have relevant ads that people want to see.  In a nutshell, that is Facebook. If you are an ad network that is not facebook, you should immediately start putting a thumbs up/down button on all your ads.

However, there could be a downfall to this system as Sparxmind advises, “it would have to be consistent on all ad networks. you’d get a rogue malware ad that the thumbs down is part of the ad.”

Tricking you to click. Ugh. Let’s not leave it to each individual ad network to have this system. Instead, the browser can have a plug-in that centralizes the thumbs-up/down system. All the information gathered through these likes/dislikes are shared among everyone–the advertising network, advertiser, AND the general public. That last group is important. I want to see which ads are getting great feedback–and which ones aren’t.

Could someone game the system by clicking a time of times on the thumbs up? Yeah, but that could happen on Facebook too. In theory, you could create a ton of Facebook accounts to like specific posts. But Facebook has things in place that curtail this activity. The browser can do the same thing. IP tracking and user log-in. Google Chrome probably would not be the best browser to do this, because it’s created by Google who already has an interest in their own ad network. Perhaps this should be a Firefox thing.

Imagine if Firefox became the browser where you get to say, “hey, in these ad spots give me only the stuff that piques my interest. And I get to pick what that is.” Ads could become something that we actually look forward to. Isn’t that what everybody wants?

We could take this even a step forward and give people the ability to opt-out of certain topics. The simple like/disklike really isn’t enough. Why did the user dislike an ad? That leaves it too open for a Facebook-like algorithm of what gets shown and not shown. Certainly advertisers and the ad network loves that sort of control, but this browser plug-in is about giving control to the consumer. Give the consumer the option to see exactly which topics and which products can show ads.

I have zero desire to see ads about automobiles or anything related to car culture. Show me zero ads for that. But ads for Transformers and 80s toys? Yes, please! I have a three-month child at home, I’d be open to ads about that. But don’t show me ads for three-year-old stuff.

Instead of ad blocking altogether, let’s give consumers ad control. This plug-in would have the following options:

Are there other options you would like to see in an ad control plug-in?
Please leave your thoughts in the comments.

1 thought on “Instead of ad blocking, control which ads you can see”