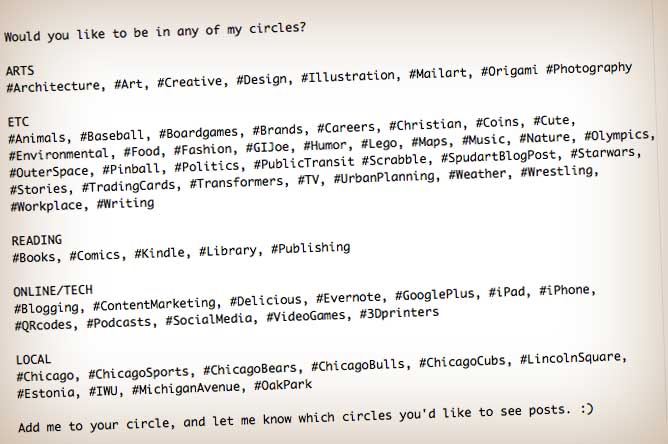 Do you wish you could filter out posts you don’t care about on Google Plus? Take Guy Kawasaki with 4.6 million followers. Great tech business mind of Apple. But the man posts photos of everything in his life. Who cares for that? Readers should have an option to not be in the circle where he shares those posts.

Recently I came to this realization and tweeted it:

1) Less discoverability
Posting to specific private circles makes the posts only viewable to those people. People who could have come across my posts through Google or other means would never see it unless they were in that circle. Many times maybe only 20 people would see a post.

2) Less google-juice
Google will rank your posts higher when your Google Plus posts are shared more.
By posting to specific circles, those posts get shared less, because less people can initially see the posts. Less sharing means less SEO for google rankings.

3) Readers don’t want topic-specific content
Every time I added new people to circles, I would inform them of the couple circles they were added to; and point them in the direction of my about page that had a list of 60 topic circles that they can request to join. (archived screenshot of the introduction section on my about page)

Nobody ever requested to join any of my specific topic circles. Perhaps I had too many topics for people to choose from. I still believe that readers should want topic-specific content. Perhaps the general public isn’t there yet. As we have more and more content to filter through and read, people will demand content be categorized by topic.

4) Nobody else posts to circles.
Most people on Google Plus make all their posts public. It’s how people use the system. Everytime I explained my focused system to people, they would respond with, “oh that’s not how Google Plus works.”

I thought Google Plus was supposed to be all about circles. But clearly it’s not. Do you post to specific circles on Google Plus? If so, please let me know in the comments.