The apps that make your phone’s home screen have special honor. The home screen can hold around 24 to 28 apps. You hand-pick them for easiest access. The other apps on your phone? Buried on secondary pages. 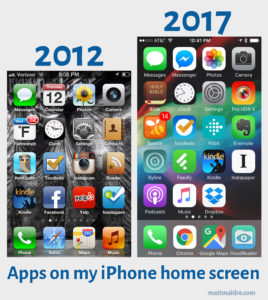 Chances are, over the years you fine-tune this list of apps that appear on your home screen. Comparing your home screen today to the on your phone five years ago is a nice blast from the past. You see how your app selection has evolved over time.

In the past five years, I’ve had a total of 39 different apps appear on my home screen. We can use this as criteria to build a list of the 39 most important apps to consider including on your home screen. Let’s break this list down into five tiers.

Apps that appeared on my home screen for five years.

Apps that appeared on my home screen for four years.

Only one app has remained on my home screen for exactly three years: Instagram. Initially in 2012, it was a must-have app for me. Then in 2013 Instagram made really bad terms in their user contract, so I boycotted the app for a year. Returning back to the app, by default I placed the app back to its previous spot: the home screen. Even though it didn’t deserve such a place of honor.

Instagram is a simple 30-second time-kill app. Waiting in line? Pull up Instagram and do a quick scroll. But what you see in scroll is troubling for me. I personally see Instagram as a time suck. Why?

1) Most of the images my friends post are regular everyday photos. I could just see those images on Facebook.

2) A ton of awesomely creative people are on Instagram. Even though I don’t know these people, I could follow them for inspiration. However, they have such large followings that if you comment on their photo, they will likely never reciprocate and look at your images. Heck, they get so many comments, they may never even read what you say! I use social media to be social and connect with people. If a super-creative person is not going to reply back to me, then I don’t find it worth the time looking at their work. Yeah, it’s a rather brash opinion on my part.

I’ve got more to say about Instagram, and why it’s a poor service. But I’ll save that for another blog post. For now, Instagram gets second page treatment.

Apps that appeared on my home screen for two years.

Apps that appeared on my home screen for only one year.